I played PMS during my most difficult Yoga class. It was as though everyone breezed through it. It was amazing.  ~~Susan G: Kundalini Yoga Instructor

I play the ADHD all day in my Special Ed classroom. All the children except one had noticeable improvement. We love it and play it every day.  ~~Anonymous

I am familiar with the vibroacoustic therapy, as Regina is my wife, so you may find this result exaggerated or even hard to believe; however, it is true. I began feeling very sick and in pain on February 2nd 2013. I thought it was a kidney stone because of the intense pain. I took an 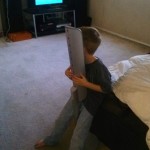 Here’s another mother who is using the Autism DVD, she emailed a photo of her child, who loves when the DVD is played, he hugs the speaker the entire time.  This is only the 2nd day, but there is a great deal of hope for a positive change.

The results of the Autism DVD have been astounding!!! “After only two weeks the entire dynamics between my autistic son’s changes. Prior to playing the DVD my children never played with each other.  Now my older son is watching out for my younger son and they play together.  The house is so peaceful when I play