I have known Regina for around 2 years now and can write testimonial after testimonial as to the healing that her music and DVD’s have provided for my daughter and myself.

I first met her at a health fair and was introduced to her music. I was telling her about my daughters stomach problems and she (without knowing me….we JUST met) sent me home with her last Ipod and speaker system.

My daughter was prescribed an antibiotic when she was a year and a half and what the doctor DIDN’T tell us is that antibiotics STRIP your stomach of all the good bacteria and since that time her bowel movements got worse and worse, with no luck taking the prescription medication that the doctor prescribed.

After one week of playing Ave Maria  (could have been less, it’s been 2 years) with my daughter falling asleep with the speaker set & vibroacoustic music on her stomach, she was healed completely! No more horrific bowel movements. 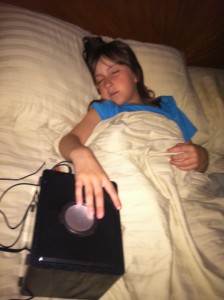 Just recently, Regina handed me the Respiratory Relief and was telling me the results people were having. At that time, I didn’t need to use it. About a week ago, today is March 22, 2013, my daughter started sneezing, coughing and had dark spots below her eyes. A friend said, you might want to get her started on Claritin. I so do not like using meds! After getting home, I remembered Regina’s Respiratory DVD. So I set it up in my bedroom and put the subwolfer on the bed and placed the 2 speakers on her chest under the covers. I played it twice before I went to bed. The next morning, when we went to my friend’s house, she said Kayden looks great! I told her what I did and I KNOW that the Respiratory DVD healed her of any sinus/allergy issues she had going on! Here’s a pic of her laying in the bed with the speaker system.  Keep them coming Regina!!!